So, the last (nearly) three days have continued to be eventful…

On Sunday I had the great pleasure to move out of the hotel I started off in into my colleague Damien’s apartment while he is in Sweden for the week. Safe to say I was near overwhelmed by the luxury and didn’t actually venture out all that much as a result…

I did however push forward in my attempts to vaguely speak french in cafes/restaurants (and got everything I ordered, at least!), and also went for a walk down to Boulevard St Denis, Boulevard Poissonniere, Boulevard Montmartre, and Boulevard Haussman, before turning back up Boulevard La Fayette. Along the way I came across a couple of traditional Parisian Arcades: Passages Panoramas and Passage Jouffroy. Funny thing was, that night I was reading Umberto Eco’s ‘The Prague Cemetery’ and these very Arcades were mentioned, but being written about in the context of 100+ years ago… It was funny that the comments in the book reflected, in part, my impressions of them:

“I adored passage Jouffroy, perhaps because it held three of Paris’s best restaurants – the Diner de Paris, the Diner du Rocher and the Diner Jouffroy. It seems, even today, that the whole of Paris gathers there, especially on Saturdays, in the glass-covered arcade where you are continually jostled by world-weary gentlemen and ladies who are too heavily scented for my taste”. 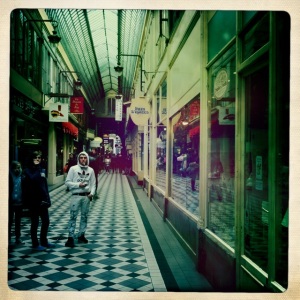 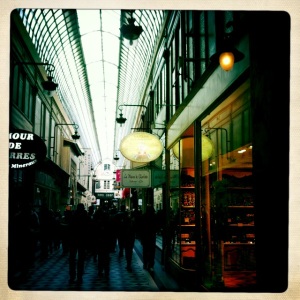 “Perhaps I was more intrigued by passage des Panoramas. The crowd you saw there was more working class, bourgeois and provincial, people who looked longingly at antiques they could never afford…” 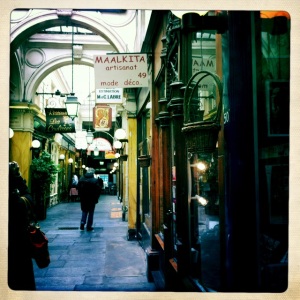 It was interesting in that while Passage Jouffroy seemed to have been spruced up a bit/definitely of a higher class, and didn’t necessarily entirely reflect the stereotypes of the arcades I had in mind (as selling curious specialist items and second-hand collectables), Passages Panoramas absolutely had the feel I had imagined from reading Benjamin’s ‘Arcades Project’/Aragon’s ‘Paris Peasant’ (though, that was around 6-7 years ago so my memory is a bit sketchy on it/I may be overemphasizing this a little).

Those coincidences aside, on Monday I got the train out to Cergy to move into the apartment here. This again proved eventful, with my train ticket not letting me out of the station at Cergy for no apparent reason (I ended up effectively jumping the barrier when a friendly/helpful woman offered for me to sneak through on her ticket!), and then when I got to the Uni it was all closed for the bank holiday (although we had been told someone would be here). After some random banging on doors I did manage to get hold of a security guard and into the apartment.

Today has been entirely uneventful in the best possible way – I went to Damien’s office and wrote, made some lunch, and now I’m back at the apartment doing more writing (and will be on into the evening).

Tomorrow I’ll be writing again though taking a trip back into Paris in the afternoon to collect the keys for my next (and should be final!!) apartment. Fingers crossed the train goes more smoothly…

I am currently a lecturer in Human Geography in the School of Physical and Geographical Sciences at Keele University. I've previously lectured at Plymouth University, and again at Keele before that. I completed my PhD (titled 'Ecologies of Street Performance: Bodies, Affects, Politics') at the University of Bristol in 2009.
View all posts by Paul Simpson →
This entry was posted in Paris. Bookmark the permalink.